Self-portrait as Evdokia with progress pics 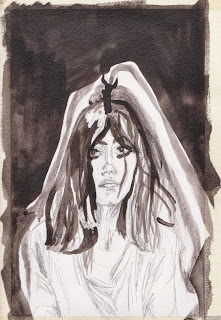 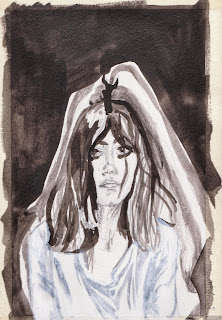 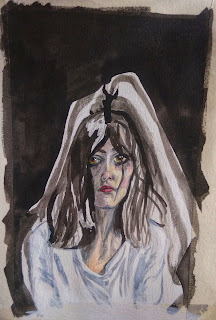 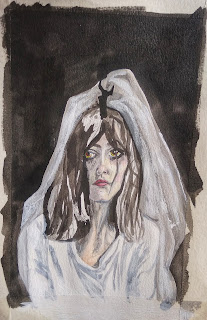 Part of my historical prostitutes series, Evdokia is the name of a classic Greek film about a woman of the same name.

The main soundtrack is also a Greek classic called zeibekiko (type of dance) tis (of) Evdokia(s) which I find charming because I love zeibekiko dancing with great music like this piece... There's a mix of sadness, strength and dizziness in this kind of art. However, part of my inspiration was also this cretan folk song.

Greek cinema seems to have a favour for prostitute main characters so be aware of the next one coming up... :)

Ardjan as Aquarius at Listis beach 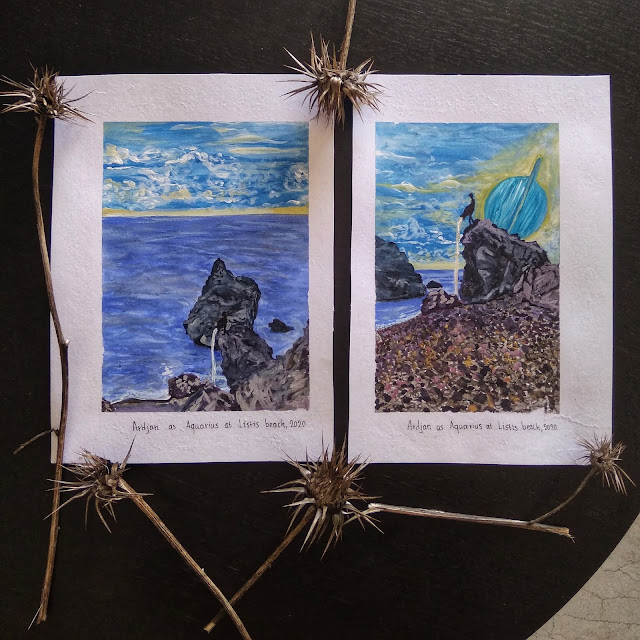 I had mixed feelings about going back to my fatherland for Christmas this year but I decided to go since my sister Margaret who lives in the UK would join us with her new husband Ardjan and I wanted to get to know him better. I also had paperwork responsibilities concerning the land and the house that made me suffer a lot in silence... I am still boiling with anger about it but I think that I'll dedicate a different post to it, discussing the artists home and studio in general and in relation to myself.

The good news is that the new family member is great! He added love (i think he was baking or making some other kind of dessert every other day) and warmth and lots of laughter to the house and I'm looking forward to future meetings like this. One of the days I enjoyed in particular was when we went to the beach to drink something and chill. Listis is my favourite beach for cliff jumping (along with skouro beach) in the area of Viannos. It has the highest rock where I've jumped from (5-6 m. I think) and a lot of shaded space from trees or rocks for resting in the summer.

Ardjan made me happy when he accepted to pose for me even though it was very high up and windy. My initial inspiration for Aquarius came from this song and in this video by Sokratis Damoulakis, you might glimpse the atmosphere and motivation behind my paintings. I've copied some info about the beach and pasted below, along with some personal photos from that day. If you ever plan a road trip in Crete I definitely recommend it and don't forget to contact me in case I'm there. :) 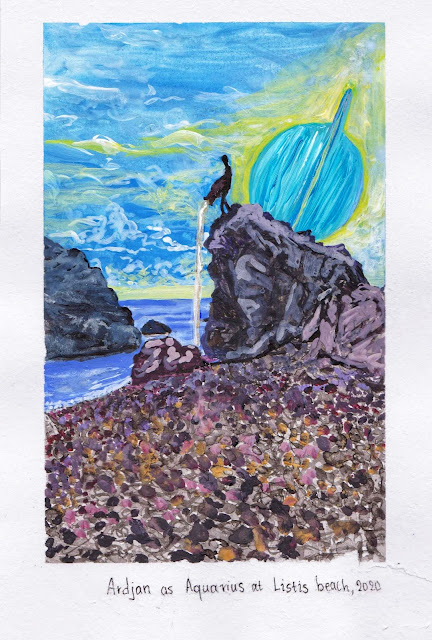 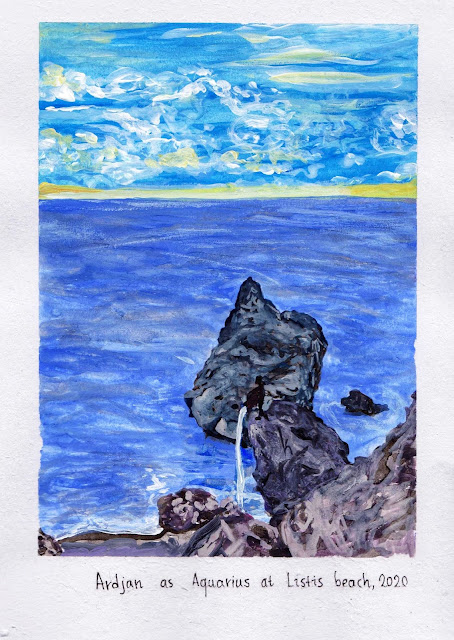 Listis is located 69km southeast of Iraklion, between Kastri  (2km to the west) and Tsoutsouras. The street linking Kastri and Tsoutsouras passes next to the beach. However, in order to get to the beach you should descend a steep slope. Alternatively, you can get off at the next beach of Kamboula and walk eastwards. Whichever way you choose, it definitely is worth it.
This quite small beach is certainly one of the nicest in Crete. It remains unorganized, but can become busy in peak season. It has sand and shallow crystal clear waters. What makes it special is the big rocks inside the sea and on the shore. Although there are many rocks in the water, the seabed is generally sandy and is ideal for swimming and splashes! The rock above the beach, called the rock of Listis (= bandit) hosts several nice caves; according to the legend, a bandit lived once in the caves. The caves can be reached quite easily from the main road, not from the beach. Atop the hill, there was a small sanctuary in ancient era.
Πηγή: Listis beach - Travel Guide for Island Crete, Greece cretanbeaches.com
https://www.cretanbeaches.com/en/sea-tourism/central-crete-beaches-heraklion/listis-beach-keratokambos 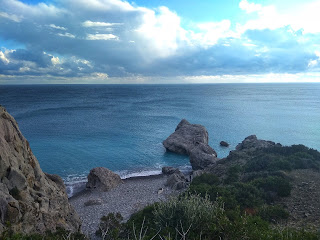 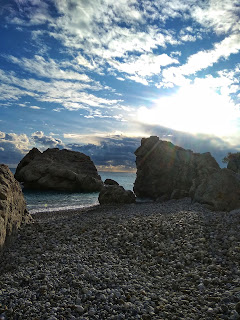 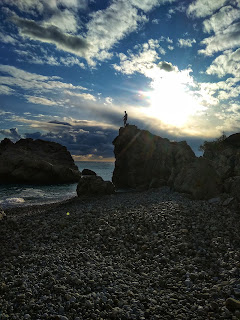 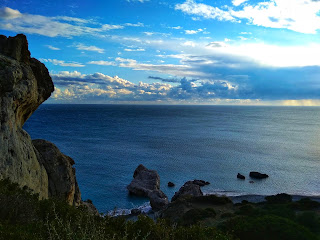 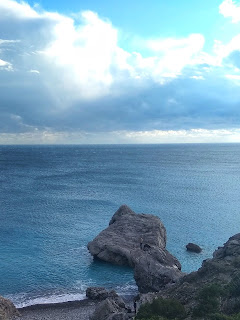 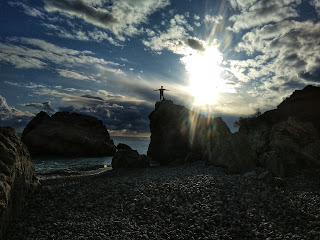 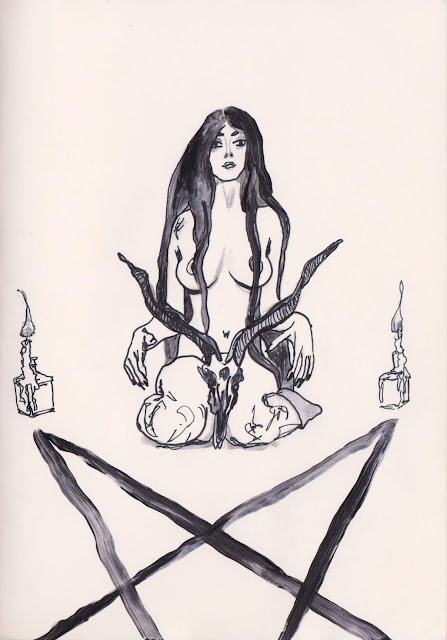 My work "Nude Woman in a Mediterranean Cypress tree forest" explores the relationship between a misbehaved person  according to the laws and common social norms and society itself. You, as the viewer represent society and your reaction to my painting is what makes this connection. The landscape is a real place in Corinth and I decided to stop by and open my sketchbook: 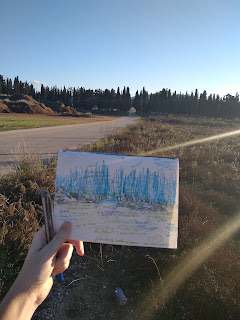 It is a beautiful seight and while I was passing by, I was wondering how would drivers react if I was standing nude there at that time. Then I thought of myself in other situations while being in the car and observing prostitutes or hitch hikers by the road, or a woman dancing nude on the bonnet of a mans car while the traffic light was red. ‌ I guess that these questions seem odd and weird but I would appreciate some feedback with your thoughts as the observer of my painting. The real purpose of me painting this is my relation to the concept of belonging. I recently watched a video by Teal Swan where she explains that when someone is struggling with belonging, it means that he/she is operating in the world from a place of shame. I remember what shame feels like because when I was about seven or eight years old they baptized me and my by three years younger sister inside a church full of people and I was naked and trying very hard not to cry but nobody ever gave me a good explanation of why I had to go through that horrible experience. In addition there was also a teacher at school saying that "children who are not baptized at an early age are bad children". I remember myself being terrified of this subject coming up in conversation throughout primary school, I even burned all the photos of my nude self being there and felt awful everytime I saw something related to it. It caused a lot of insecurity in me and I somehow still despise society for accepting it as normal. This is why my nude character is gazing at the flower as a sign of nostalgia for what once seemed innocent and pure before the filth of the common people ruined it!

My next painting is a self-portrait as Medusa. I think it turns all the negative "no body loves me"  and self hatred into something beautiful and acceptable. I'm thinking of making t-shirts out of this because I always liked the idea of having snakes as pets and in this way I'll be able to have them on me without the responsibility of taking care of them. I have a drawing from 2015 of the same subject on watercolour paper which I'm also presenting here:


I think I'm going to focus more on portrait painting in the future...


To balance the "negativity" of Medusa, I decided to create a portrait of myself as a famous greek prostitute. I am working on a series of "Historical prostitutes" that I would like to exhibit at the Casino of Loutraki in the future.

My next two paintings are inspired by the universe. I' ve been absorbing a lot of information about astrology in the past few months and I would like to dedicate works to the stars and the planets.
Saturn and Philyra is also a part of a series of paintings titled "Gods & Lovers". Philyra is also the greek name of the silver lime tree (flamouria) which I haven't seen in Crete. I would like to paint a woman on this tree so if you are interested in becoming my model you can message me.

Overall, I am happy with my paintings, especially this last one. There's a beach in Corinth where I live now and one October evening, after drying out I covered myself with a warm tweed jacket and sat on a sunbed to eat an apple while enjoying the sunset when this couple of tourists showed up out of nowhere and acted like I didn't exist. :P I felt at peace with myself at that moment and I just had to capture it! 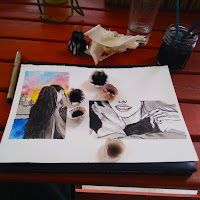 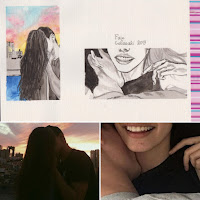 Finally, through my Etsy Store you will find a new option where you can order a personalized portrait commission of you and your gf/bf or family!

Happy Winter Solstice to all my followers and sorry for not posting for so long but I was in a rush to move from my island Crete, to mainland Greece. Corinth is one hour away from Athens by train and below you can see the statue-monument of the town along with the last full moon of the decade! 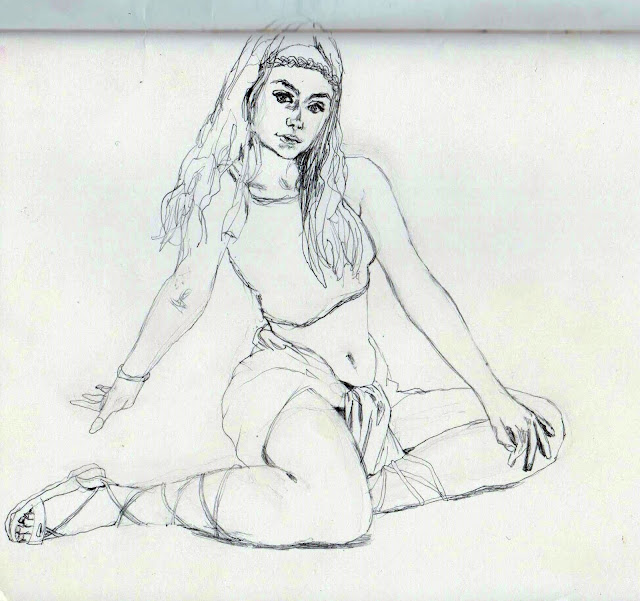 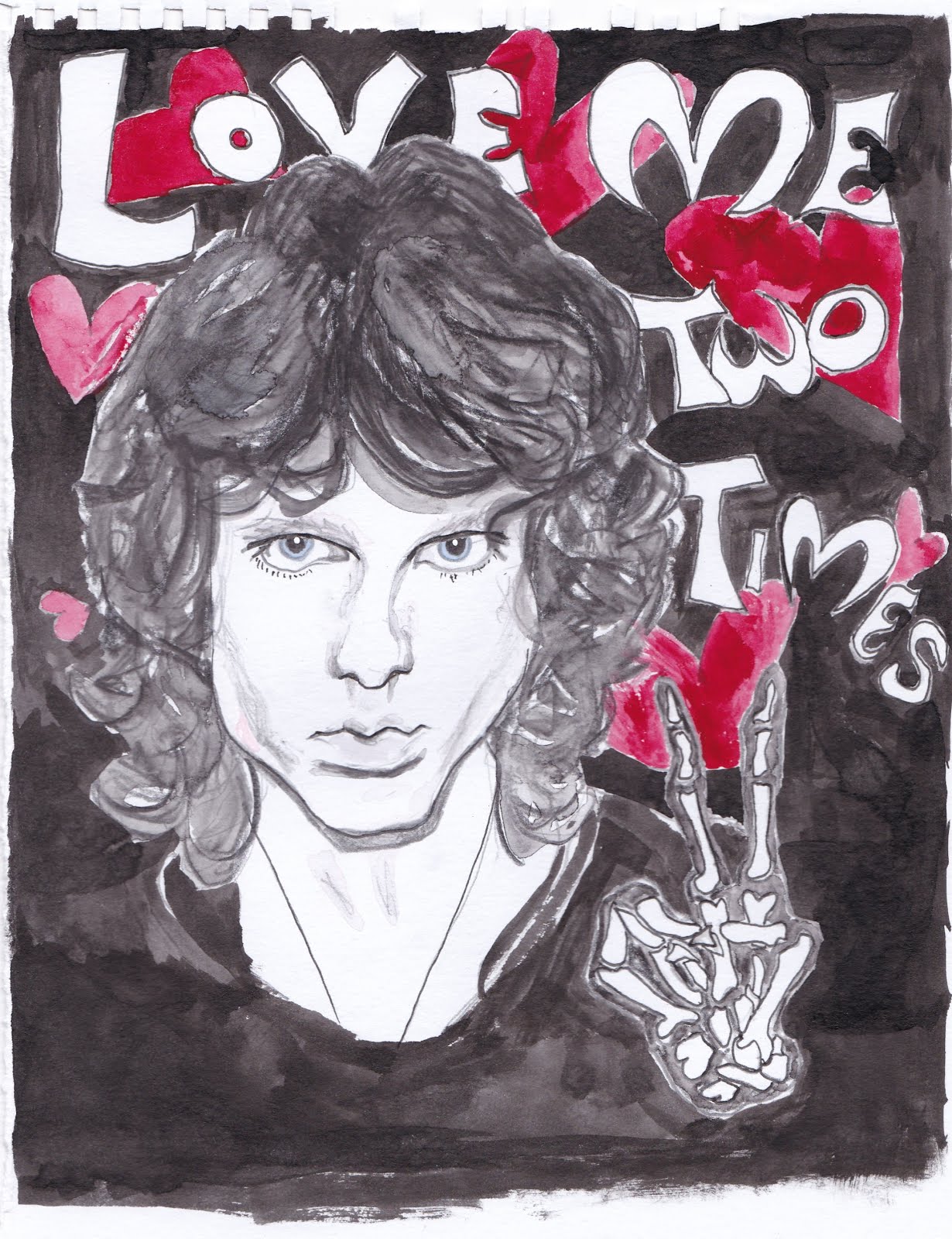